Eventbrite page was set up to allow registration to keep the numbers to a reasonable level and started to promote the event on the Raspberry Pi forum and on Twitter through my @Winkleink account. Through retweets from @Raspberry_Pi and @Teknoteacher we got 50 registrations with over a week to go.

I put out the call for presenters and two people stepped forward
Dave Ackerman the Pi in the Sky man offered to present on sending balloons into the stratosphere and using a Raspberry Pi transmitting live images from the flight.
Stephen Cornes offered to present on using a hard drive as your primary drive and also connecting to the Raspberry Pi over serial using the GPIO serial connection. 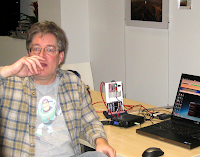 The 20th January rolled around and after snowing for 3 days I expected the day to be a flop.
Giving myself loads of time I got there for 12:30 with a 2:00 start and began getting things organised.

Then to my joy Dave arrived about 1:00 with 3 boxes of bits and a presentation so I knew it wasn't only going to be me.
We both got ourselves set. Dave in the boardroom with the projector and the theatre seating and me the main area where the show and tell activity was going to go on.

I’d spent the week getting a small cheap remote control car to be controlled through Scratch (see previous post) but due to my mad/bad wiring when I set it up interference between the wires meant the car always wanted to go left. I could show the wheels spinning forward and backwards but the grand plan of having people try to figure out how to program Scratch to get the car to navigate an obstacle course did not materialise.

Alongside my nearly working demo Dave set up his ballooning bits. 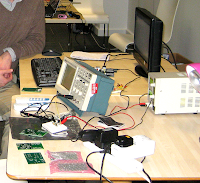 Paschal Egan showed using the GPIO to produce 433MHz home automation control signals to switch on and off domestic appliances.

Ian Law brought along his set up to see if someone could help with debugging the Python snake game he was working through from the Raspberry Pi Users Guide.

At the far end Leo White brought along his Raspberry Pied BigTraks with robotic arm and webcam.

In the end over 30 people made it out in the snow to attend. An amazing turnout considering the weather. Ranging in age from 15 to a much older.

Once most people had arrived Dave presented Pi in the Sky. I was so wrapped up I failed to keep him to time so we got a lot of details on what was involved. 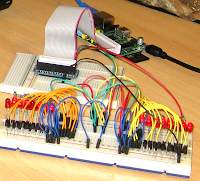 Then Stephen presented on using a hard drive as your main file system and also connecting over GPIO using serial. His impetus for both was issues with SD cards giving errors and not wanting to have to attach the Raspberry Pi to a screen. If you connect over serial then you even get to see the boot sequence. This is not the case if you SSH in over the network as networking has to be active for the SSH connection to happen.
Stephen kept to time and by the rush of people to the front after he finished his presentation was of interest to a number of people attending.

After the presentations we went back to the show and tell area. Where we mingled and chatted. Those of us with demos answered questions and tried our best to explain what we did, how we did it, why we did and what use it was.

I must admit seeing the BigTraks with the robotic arm controlled by the PS3 controller over Bluetooth and live streaming to a browser was fantastic. It really showed the power of the Raspberry Pi and the number of things it can do at the same time. 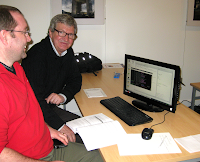 There was a crowd around Ian’s Raspberry Pi trying to figure out what was wrong with his code. In the end Robin Fordham came to his rescue and worked out there was a rogue file in the directory with the program causing problems. Once this was deleted then everything worked as it should after a simple typo error was fixed.

From the feedback people have provided it sounds like the event was enjoyable and achieved its goal in inspiring people to do more. One person has invested in a Raspberry Pi, another purchased a Pi Cobbler and others found answers to their questions that would allow them to continue with their projects. 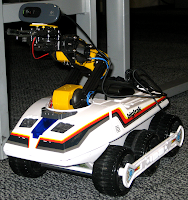 From my point of view as an organiser of a Raspberry Jam I must admit it was quite painless. Just set things up. Let people know it’s on. Manage registration on Eventbrite and then play host on the day.
A few things I would tweak are
Maybe have each person do a 10-20 second intro (name, own a Pi, what done so far, what do you wish to do) so people can connect and also any gaps in the official(ish) agenda can be filled by meeting like minded people.
Keeping presentation to 30 minutes. Extra detail for those interested can be do one on one in the show and tell area.
Have people demoing put a sign or sheet out showing what they are demoing so it’s easier to figure out which projects are of most interest.
Encourage others to take pictures and videos as I was either presenting or running around so took very few photographs and no video.

Here’s looking forward to the next Egham Raspberry Jam.