Yesterday was the 4th Egham Raspberry Jam and we had a great day with a variety of projects on show and nice range of people attending.
Everything from people learning about the Raspberry Pi so they could teach their grand children about computers and computer technology to children looking to be inspired for school projects.

I arrived about 12:00 noon to get set up and people showing started to arrive around 1:00.

We had a great mix of projects.
Leo White's Big Trak http://www.mybigideas.co.uk/RPi/BigTrak/
Now upgraded with a new metal robotic arm. 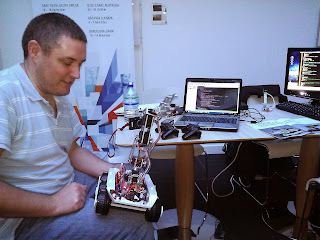 Leo also has a project that just looked like flasking LEDs on the PiGlow until I had a quick chat with Leo and found out that it was all being done in BBC BASIC using RISCOS running on the Raspberry Pi. So, if your old enough to have programmed in BBC BASIC you will be right at home. 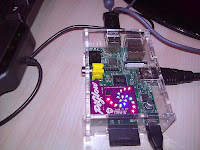 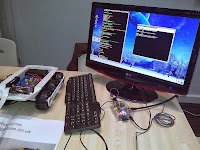 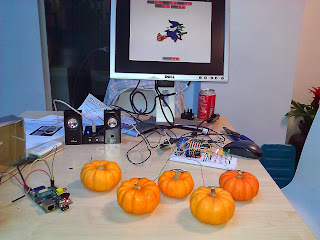 Stephen Cornes brought his excellent LED clock which displayed the time in multiple formats.  This project uses the excellent Pi-Lite board which communicates with the Raspberry Pi over serial.

Alan has his bi-direction motor controller running. Even though this is a small project it is a major milestone as Alan knew nothing about Linux, programming or electronics when he came to his first Jam and now he is writing python code on a Linux computer to control a real world motor using a H-bridge. 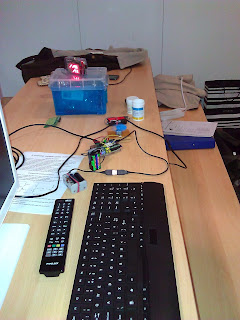 Matt Sendorek brought along his excellent Maplin robotic arm controlled from Scratch using an intermediary Python script.  Matt has been building this to to use in his after school computer club and from his picture on his write up of the  Egham Jam it looks like it's the perfect thing to get kids interested in computing http://mattrealm.me.uk/blog/?p=41

Matt has also put together a guide to getting the robotic arm working with Scratch
http://www.mattrealm.me.uk/media/arm_doc.pdf 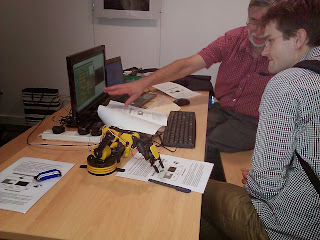 Marcus Taylor-Moore brought along his robots that were used in a maze challenge and also a really small quadcopter. All very exciting and I know I want both...
https://plus.google.com/u/0/+MarcusTylerMoore/about 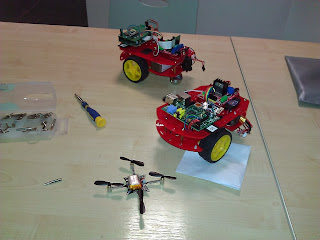 Nicholas Herriot had a great set up of home automation. I must admit I didn't get a change to chat much to Nick and so my knowledge of his project is very limited. 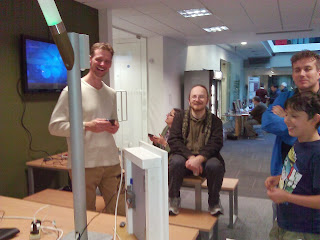 Then the amazing Neil Ford came with a show of his own. Not content with 1 display he brought 5
2 Wheel Robot controlled by Raspberry Pi. Perfect as a beginner robotic project with a build that requires no soldering and only a bit of glue. 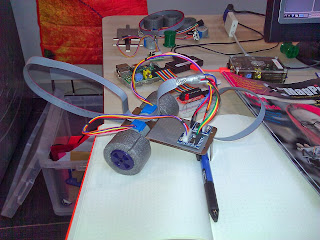 Neil set up a station where visitors could try out Scratch. See how easy it is to use and how through some simple steps interesting and fun projects can be built. 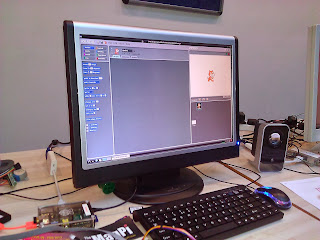 We had some great music being composed using SonicPi. I must get some time to check this out as it really looks like a great way to introduce programming and giving immediate feedback in a fun way. 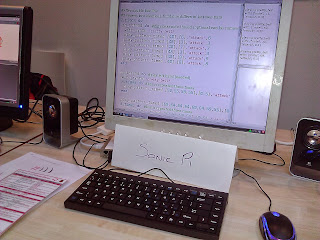 How about controlling real world objects with Python 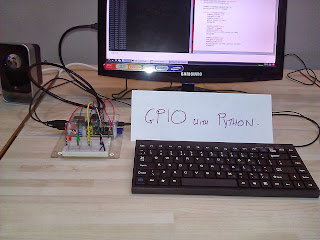 Finally, a great Minecraft set up that was very busy during the day. With kids doing some playing and programming. 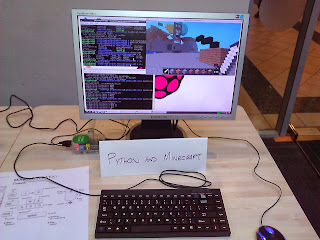 My own little project was Halloween based with a PIR detecting motion and then flashing LEDS inside a couple of clear/greenish skulls and a 'Scream' mask and at the same time played a creepy sound. The sound was so convincing that my daughter didn't like me playing it at home.  All programmed up in Python and using Pygame to play the audio. I did up a PDF Guide with the build instructions and also the Python code. Special call out for Raspberry Pi Spy for his guide and code I used for the PIR motion sensor.  I was just looking for the details on the PIR as I bought it on ebay and so received no instructions. Not only did Raspberry Pi Spy provide details on the PIR he also provided code that works.. 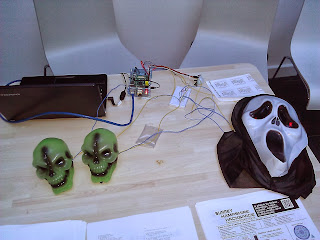 I also brought along the Surrey & Hampshire Hackspace 2 pager cheat sheet with details on programs to install on the Raspberry Pi, Controlling an LED, building a Sphere in Minecraft and other useful information on one page and the FOSSWire Linux Cheat Sheet which is a great reference for the often need Linux commands that somebody starting out may not have experience with.
The Hackspace is based in Farnborough and is a great place to meet like minded people who are interested in Raspberry Pi, Arduino, Linux, 3D Printing, Online security as many other fun activities.

I hope those who came had a great time and were inspired to try something new with their Raspberry Pi. It's an amazing little bit of kit that can be used in many different ways (as can be seen from the projects on show)

Here's looking forward to the next Egham Raspberry Jam.

Also, if you're into seeing what's going on with the Raspberry Pi and have a focus on Education the the Raspberry Jamboree on the 27th-28th February 2014. Some great presentations and workshops are already announced and more will be announced closer to the time. I plan to be there on the 28th at least. Maybe stay over for the party.

Posted by Winkleink at 9:54 PM No comments: