A while back I made a game using some Arduino Nano and NRF24l01 called ButtonFlash (https://www.winkleink.com/2016/08/buttonflash-game-made-with-raspberry-pi.html)

Mnadatory video showing it being played.

It was good fun to make and people seemed to enjoy it but it wasn't in a state for someone else to make easily and wasn't robust so running repairs were needed.

But I really liked it and wanted to do a version that others could make easily.
At the same time EasyEDA was starting to be advertised as a simple web based PCB design tool with integration to a PCB fabrication facility so getting the boards manufactured would be super easy.  So, I took the plunge and designed a PCB and had 10 of them manufactured.


I soldered a pair and started running  code to test them and it kept failing.  I tried different libraries and different setups and every time I couldn't get it to work reliably.  This is part of the pleasure of using code and electronic components created by others.

Today I figured out one of the NRF24l01 that I used can transmit but not receive.  Maybe I damaged it as had power caps in the wrong way around when testing early on.

I soldered up a 3rd but without the switch and LED and ignoring the bad one the pair I used were reliable today. 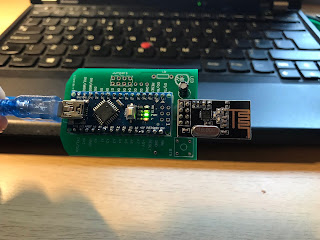 Now as I tried lots of sample code and had different results with them I have prepared my own tester code.
This code uses the Arduino, NRF24l01, LED attached to Pin2 (through current limiting resistor) and switch on Pin3 using internal pull up.

Pressing the switch on the transmit one and it's LED will flash 5 times and change to receive mode and the receive one will turn it's LED on full and change to transmit mode.

So, if you are messing with Arduino and NRF24l01 then maybe this code will be useful to help you.

Code is available on GitHub