On one of my regular trawls of ebay I found this. 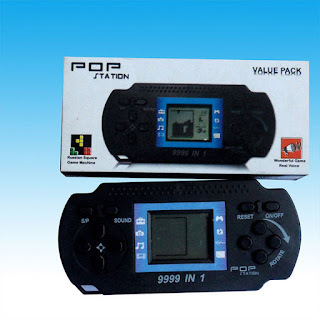 Looked interesting.  OK the display is obviously mono-colour LED and not back lit but for £1.39 I thought it was worth a punt.

From the Listing the dimension are: Product size: 14*8*2cm
Bigger than the Sony PSP Go 12.8*6.9*1.64cm
If Sony can squeeze a 4.3" widescreen display in the PSP Go then this could be a very useful case to work from. A nice sized case with 10 buttons.

For reference a Raspberry Pi Zero is 6.5cm x 3 cm.  An easy fit and with dimensions greater than the PSP Go one of the many 3.2" LCD displays I see running from a Pi should fit nicely.

£1.39 for a case with 10 buttons that should easily take a Raspberry Pi Zero and 3.2 " screen with space for other bits is a bargain.

I see a plan coming together so I ordered one two weeks ago and it arrived today.

The packaging is the same as the listing which is always a good start. 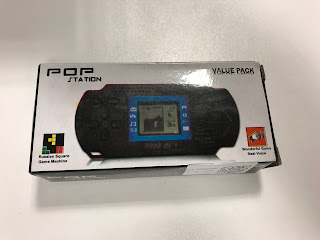 Opened the box and inside was the actual console. OK a bit rough and the sticker isn't straight.  Not a problem as I plan to remove all that anyway. 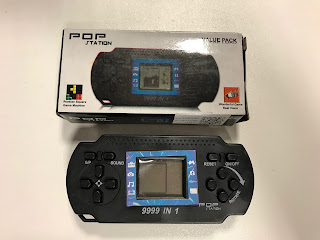 But there was something else not right.  I checked the listing again and confirmed the dimension Product size: 14*8*2cm

The dimensions on the actual one I received seem a bit off.  Annoyingly I don't have a ruler with me at the moment so I'm using AAA (not AA) as the standard measure.

An AAA battery according to Wikipedia is 4.45cm long.

From the picture below it looks like this may not be 8cm wide or 14 cm in length. 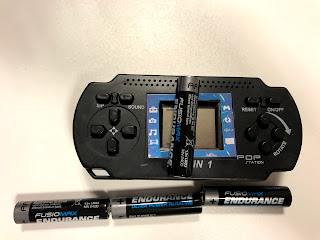 It is more like 9cm in length so a Raspberry Pi Zero may still fit inside and 5cm in width.
There goes the plans for a 3.2" LCD display. Maybe one of the  0.96" OLED displays might fit.


I almost forgot.  What about the 999 games.
It does have Tetris, a variety of Breakout games, a Tank combat game and a Driving game.

The driving game is especially bad as there are only 2 lanes and you just move from left to right as the cars come down the screen. 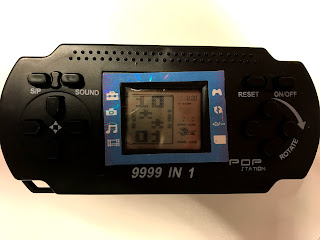 In summary how does it compare to the listing title.

As an added bonus you also get the amazing driving game, breakout and tank combat games, so in a way it over delivers on the gaming promise.  I didn't count whether there are 9999 but I suspect we all know the answer to that.

But, if your reason for getting it is to have a 14cm x 8cm x 2cm case with an opening to put a 3.2" display and a Raspberry Pi Zero you will be very disappointed as it's most definitely a lot smaller than the listing.

It is held together with screws so maybe a teardown is needed to see what's inside and if there is anything I can salvage from it.

If the larger one really is those dimensions then a project may be on to use it as a shell for something more fun.