Making Games with Scratch and Sense Hat on Raspberry Pi

The result is Collect the Dots a simple game where you're a blue dot collecting red dots.  It's kind of like snake without the tail. 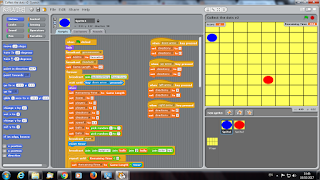 You control your dot using either the small joystick on the Sense Hat or use the keyboard on the computer.  Press Down to start the game.  You'll see in the video it tells you this on the Sense Hat, but if no Sense hat is attached and you're running on screen there is no prompt.

TIP: As the wonderful Cat Lamin points out in her blog post about using doing an animation on the Sense Hat using Scratch you have to run the code once to enable the sensors and capability of the Sense Hat.  So, the first time you run the program on a Raspberry Pi with a Sense Hat it may not work correctly.  Just stop it and start again and all will be perfect

A thought for an enhancement would be to control your dot by tilting the Sense Hat rather than using the joystick or keys.

Posted by Winkleink at 2:55 PM