eBay USB soldering iron in use


Sometimes I've to do a little bit of soldering.  Usually only a few wires and since at present I have no place to leave an iron set up permanently this requires for me to either unpack my rework station or even just a simple mains powered soldering iron.
Even doing this has resulted in me pushing back soldering jobs as the extra time for setup
as a ratio against actual build time doesn't feel like time well spent.

Then on eBay UK I came across a listing for USB soldering iron for £3.39 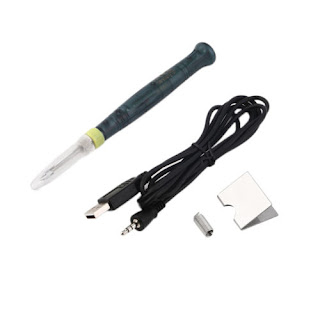 Since my electronics is usually tied to an Arduino or Raspberry Pi project I will have a computer up and running and I thought for less than £4.00 including shipped from Hong Kong it was worth a punt.
Well, it arrived this week and as per the picture it includes the soldering iron with a plastic cover for the top.  A USB to 3.5mm jack for power.  A really small stand made from a folded piece of metal with a bit taken out and just enough solder to know it's working.  Actually I soldered about 30 wires using the solder provided and have a bit left over.  Still you'll need to get some solder.

First impressions were positive.  Packed in a proper retail packaging box and not just a jiffy bag like many cheap things on eBay from Hong Kong.

The iron heated up quickly and has a red LED to let you know it's on.
It was definitely hot enough to melt the solder and do the job I required.
Since the original outing I have used it again to replace some current limiting resistors for 5 LEDs in a project I'm working on.  Again all worked great.

As I've only used it twice I can't speak for the long term reliability but from first impressions it is well worth the £3.39 it cost me.

The only things I would change are:
I would have liked the power to be microUSB and not 3.5mm jack.  I've loads of microUSB cables but this is my only USB-3.5mm cable.  If I lose it I'll have to get a new kit. Probably not a disaster at £3.39 and then I'd have a backup.

The tip on the iron is a needle tip. My personal preference is a bevel tip. The ones where it's like they cut a diagonal slice off a flat tip.
Here is a nice instructable explaining the different tips. My preference is called a C series tip in the guide.   Rarely do really fine work and even then a bevel can still be used quite well for most things.

Saying all this for less than £4.00 it feels nice to use and means I can set up, do the rework and pack away in minutes. Which is ideal when only soldering a few wires at any one time.

UPDATE: after posting this I was sent a link to a great video by bigclivedotcom where he tests, tearsdown  reverse engineers the circuit diagram.  Let's just say his review is way better than mine.
Here's the video.