Update: 3rd March 2017.  I resurrected ZeroBall today in preparation for Guildford Innovate on Saturday and did a video.

Trivia: Previously ZeroBall ran from a Raspberry Pi A+.  With the new PiZero W I thought it would be perfect to pair with the NexDock.  The NexDock has Bluetooth keyboard and trackpad and the PiZero W now has Bluetooth, so can be paired to the keyboard easily.  Making a nice compact solution.

For the recent Egham Raspberry Jam that I organised the theme was Gamification.
I already posted about sensecave a Raspberry Pi Sense Hat game  but I wanted to do something a bit more physical and real world.

That got me thinking about Fairgrounds and the kinds of games you play there.
The final decision was a ball throwing game.  Get the ball in the cups and you get points.  For those who watch US teen movies the principle is similar to beer pong, but without the beer and with points and scores....

Next exercise was to figure out how to detect a ping pong ball going into a cup.
I spent a lovely afternoon trying out PIR (Passive Infrared Sensor) sensors at  HackWimbledon. If you're near Wimbledon in the UK check them out. Great bunch of people and the events are every 2 weeks on a Saturday.

After an enjoyable day I figured out the PIR sensors are great for detecting movement of animals including people, but no use for my requirement as they even  tripped if the ball passed over the cup since the amount of infra-red light changed.  Tweeted when it failed. Luckily there was still a month to the Jam.

I now have six PIR that I can use for a different project. ;-)

With PIR out of the question the alternatives I considered were a switch or an LDR (Light Dependent Resistor) .  Both had their advantages and disadvantages.
Switch digital and easy to read and wire up, but most switches would need more force than a ping pong ball would provide.
LDR would give a great reading but is an analogue device which the Raspberry Pi cannot handled without additional circuitry

In the end despite needing extra circuitry I went with the LDR.
To get a reading from an LDR you have to create a voltage divider circuit so you can get a different voltage depending on the relative resistance values of the 2 resistors used.

Here's a great guide on voltage dividers and using an LDR

The next thing was to get the analogue reading from the voltage divider into a the Raspberry Pi in a format that it could use.  My initial thoughts were to use the analog inputs on an Arduino and then send the data over serial to the Raspberry Pi.  Considered Arduino as I have used them a bunch and knew what to do, but in the end I decided this would be over kill.  Why use a microcontroller to read analogue when there is a nice little chip that can do the same and people way smarter than me have already got it working with the Raspberry Pi.

May I introduce you to the MCP3008. An 8 channel, 10 bit analog to digital converter which communicates with the host over SPI.

Since SPI and the MCP3008 were all new to me I did the Google and found an great article by Raspberry Pi Spy. This guide explains exactly how to wire up the MCP3008/Pi and also RPI.GPIO code.
Using this I tested the LDR and it worked perfectly.  Looks like all systems are go on the project.

Then I saw that gpiozero has built in support for the MCP3008 and decided for the final project to take advantage of the ease of use brought by gpiozero.
A little test and it all worked again.  :-)

So, electronically everything works.  I can use voltage dividers with an LDR and resistor along with an MCP3008 to read the sensors and then using gpiozero read the values over SPI.

So, I began construction.

Firstly, soldering the Raspberry side headers from the MCP3008 on a strip board. 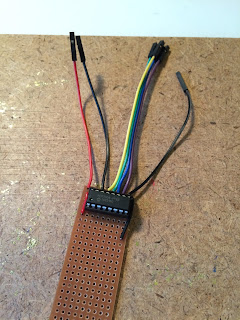 When I did this I made a mistake.  I should have left more room on the Pi wiring side of the MCP3008.  There is no need for the chip to be this close to the edge, with only one hole for the wire to be attached.  This will come back and cause me problems later...

Once this was done I moved on to creating the voltage dividers.  Since there are 6 cups, 6 resistors and LDRs are needed. 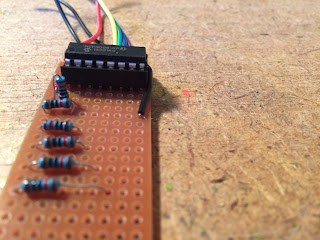 I did a quick test using one LDR to make sure I did this right. Image below shows it wired to the Raspberry Pi.  I used a model A+ as there isn't a requirement for network or more power. Yes, I wired it all up to power and stuff for testing. 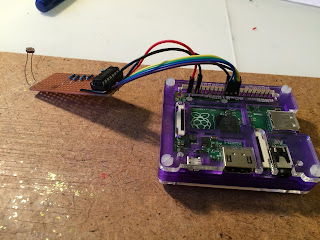 After this the need was to add the wiring for the LDRs.  That's 6 connections with 2 wires for each. 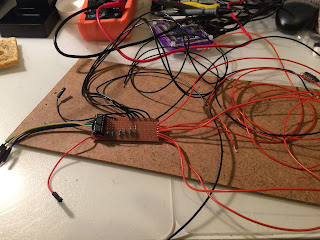 This is already starting to look a bit more complicated than the small breadboard projects I've done before.  Looking at the image above you will see 6 black wires from the top edge (GND) and 6 orange wires tied to each MCP3008 input line.

All that was missing for the voltage dividers to be complete was to add the LDR for each line.

Since this is a physical build the LDRs need to be embedded in a plastic cup.  I also needed the LDRs to be flat against the cup to make it register a passing ball without obstructing the path of the ball. 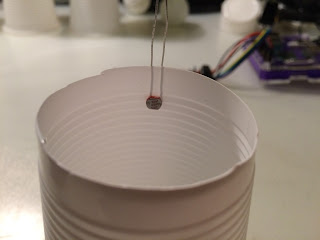 This is the first time the sensor is actually in a cup so I can check if the ping pong ball passing is detected  correctly for the purpose. More testing of a single cup. 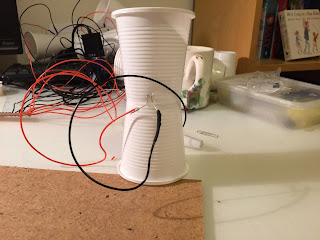 It worked and it worked amazing well.  That's 1 cup wired up.  Now just the other 5. 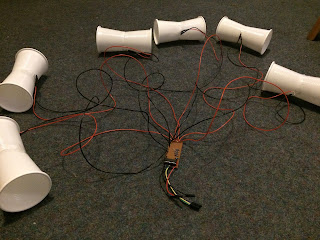 All wired up.  A bit fiddly  keeping the other cups out of the way while soldering and working with all wires the same colours to make sure I wired the correct ones for each LDR.

I had great fun at this time setting the cups up and throwing balls into them.  My kids loved it too. The fact they wanted to keep doing it even when all that happened was the number on a terminal screen updated when it happened made me think the build would actually result in a compelling game.

With the electronics sorted it was onto the bit that was new to me. The physical build.  I heard foam board was easy to work with and sturdy so went with that. Another new thing for me.

I cut holes in the foam board and inserted the cups. Using tape to hold them in place.


As I mentioned the physical build is not something I do regularly, so I didn't have a lot of tools to hand to finesse the build.  My main tools were a sharp knife, glue and tape.

Once built I again did some testing and it all worked. 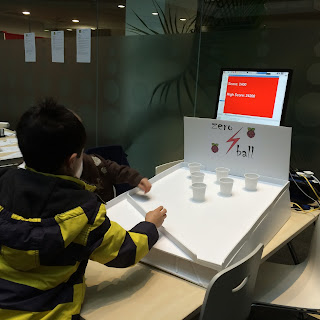 Last requirement of course was the software. I mentioned it used gpiozero for the MCP3008.  For SPI to work you have to run your code as root using sudo.
I wanted the game to feel like a fairground, so music and sound effects were essential as well as a score board.   All coded in Python.  To make this easy (for me) I used Pygame for the display, keyboard input to start a new game and also to play the background music and sound effects when a ball goes in a cup.  If you haven't used Pygame on the Raspberry Pi before then check out their recently released Make Games with Python Essentials book that is available in print, PDF, iOS and Android app.

Electronics sorted, physical build done, programming all completed.  Ready for the Egham Raspberry Jam on the 17th of January.
As I was packing the night before I thought it best to test my projects as usually for me something goes wrong on the day and since I had the time (rare for me) doing some testing seemed like a good idea.  Ahhhh!!!!.  It didn't work.  I was checking the code and the terminal output.  No readings from any of the sensors.
On looking at the circuit board a couple of the wires had broken off.  Remember I mentioned my thing about not leaving enough space on the Raspberry Pi side of the stripboard.

Doh, so that's why it's not working today. Joint snapped. A bit delicate. Soldering to do today. pic.twitter.com/HsKrLvpRcq
— Albert Hickey (@winkleink) January 16, 2016

@winkleink Literally drawn on the back of an envelope, drill sizes from memory pic.twitter.com/IZ31NzjrUz
— Alan O'Donohoe (@teknoteacher) January 16, 2016


You have to love the Raspberry Pi Community. Within a few hours I had exactly the advise I needed to get my project fixed perfectly.  But I had 1 day left and didn't leave enough room to do what they advised so I ignore their advice this time. Soldered the wires back on and crossed my fingers that it would all hold together.

On the day of the Jam the game was very popular.  Great write up from Richard Savill who is well worth following as he does some great Raspberry Pi projects and Kickstarters. With lots of kids and adults playing with it.  When a few kids gathered around the game they would just drop the ball straight in the cups to get the points and hear the sound effects. 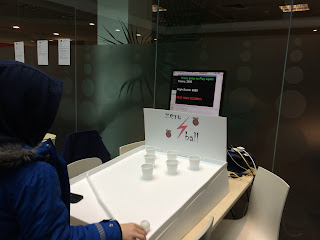 Overall, I'm very happy with the final game.  The build is a bit rough around the edges but works great.  The code held up and the kids played it all afternoon which was the desired outcome.   I also had a number of conversations with adults and kids about the code and the electronics involved, so hopefully helped a few of them to learn something new and consider their own Raspberry Pi projects.

You can download the Game Code for Zero Ball from GitHub

Posted by Winkleink at 4:49 PM